This month, Dario D’Ambrosi brings Medea back to La MaMa. D’Ambrosi, an Italian theater-maker whose connection with La MaMa extends decades, has devoted much of his career to making theater with and about people with psychiatric disabilities. His Medea (which uses both English and “Attic Greek”) builds on this legacy, and features actors with a range of “diverse abilities” (including epilepsy, neurological disabilities and down syndrome). 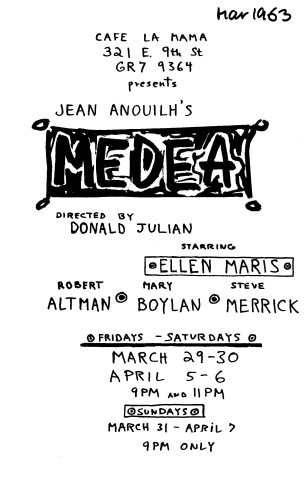 D’Ambrosi joins a long list of artists who have brought Medea to La MaMa’s stage. La MaMa artists have found inspiration in this iconic tale about the righteous anger of a woman scorned since the earliest days of Off-Off-Broadway. Our Archives contains documents going back to the first appearance o Medea on the La MaMa stage–which was in 1963, when Donald Julian directed a version of Jean Anouilh’s Médée. (Anouilh [1910-1987] was a French dramatist best known for his adaptation of “Antigone,” which critiqued the Vichy government.)

In Anouilh’s version of the classic tragedy, the title character lives in a trailer park and dies in flames. Staged at 321 East 9th Street, the production starred Ellen Maris as Medea, Steve Merrick as Jason, Mary Boylan as the Nurse, and Robert Altman as Creon, Boy, Guard, and Narrator. 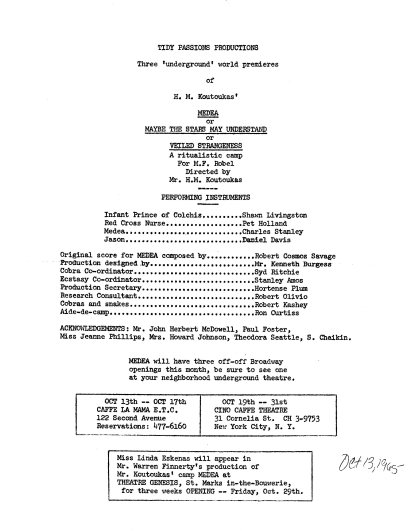 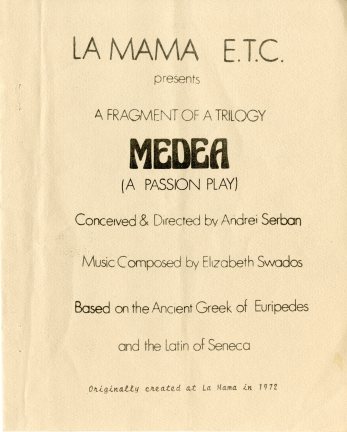 Two years later (1965) Harry Koutoukas staged his “Medea, Or, Maybe the Stars May Understand, or Veiled Strangeness” (also known as “Medea in the Laundromat”) at 122 2nd Ave. The production starred Charles Stanley in the title role. The Village Voice called this version so “eccentric as to be nearly unthinkable. The play is an enactment of the final terrible scene when Medea murders her child to avenge herself on Jason….Medea is the very heroine of old–fanatical, hideous, wronged, ecstatically suffering. But the action is set in a laundromat.”

In the 1970s, Medea was a mainstay of the work of The Great Jones Repertory. It premiered at La MaMa in 1972, and  formed a part of the company’s core repertory for many years after that, featuring in their tours to Germany, France, Lebanon, Iran, and elsewhere.

And in 2005, La MaMa hosted Jay Scheib’s reinterpretation, which starred former Great Jones Rep member Zishan Ugurlu, and told the story backwards. As Scheib explained, “What I hope to achieve in reversing the story—by running it in reverse—is to reveal a gripping examination of the process leading to Medea’s slaughter of her two sons, a king and his daughter, and her brother. Medea is a play about passionate ambition and irreversible decisions. The details of these decisions are what interest me…We all know how Medea ends. We barely remember how it starts…Suspense and her great accomplice—broken expectation—these are the tools of our experiment.”

Join La MaMa and D’Ambrosi and his cast October 8-18 to see what this new experiment reveals.

There was an error retrieving images from Instagram. An attempt will be remade in a few minutes.